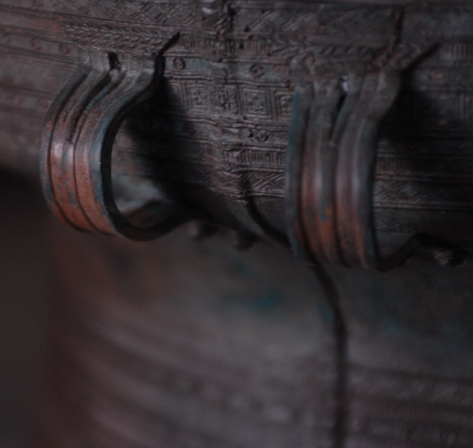 As the Dongson drum made its way throughout Southeast Asia and China, it took on meanings unique to the assimilating culture. For example, among the Karen tribal people in Burma and Thailand, the drum was used to summon the rain. This is how the Dongson drum came to be known by most people as the "rain drum." The Karen are animists and believe that the sounds produced by the drum are pleasing to the spirits ("nats") who lived in the trees, water, and other objects in their surroundings. The drums are also used in ceremonies to summon ancestors. It has been said that among this group ownership of a rain drum brings more status to the person that would possession of seven elephants.

As with Vietnam, the rain drum was used in Thailand for ceremonies and for calling the troops to action. One story tells of a Thai military leader who was short of men placing a rain drum at the foot of a waterfall to create the impression of a large army of soldiers marching into battle.

Rain drums have long been a part of Indonesia's culture and traditions. It is believed that the first rain drums made their way to Indonesia about 2500 years ago. In Bali, a predominantly Hindu island of Indonesia, rain drums are often found in temples and used in religious ceremonies. Most notable is the "Moon of Bali" drum that is impressive for its sheer size.

Bronze “moko drums” are an important part of the culture on the small Indonesian island of Alor. Despite its small size, seventy languages are found on Alor, making it difficult for people who live a mere 15 miles away to communicate with each other. On this island a male who wishes to marry must present a moko drum to the family of his future wife. Since there is a severe shortage of these drums many couples must leave the island to marry or remain single. Moko drums typically are decorated with Hindu symbolism